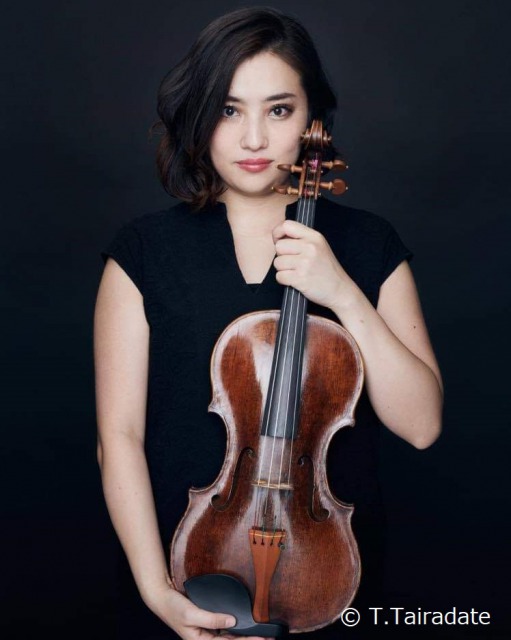 Born in Kyoto, Meguna Naka began playing violin at the age of four and viola at the age of 16. After studying music at Toho Gakuen Music High School, she continued her music studies at and graduated from Toho Gakuen Music College. As a viola player with the Quartet Amabile, she received third prize at the 65th ARD International Music Competition as well as a special prize for the best interpretation of a competition piece. Also while playing with the Quartet Amabile, she won 1st prize in the ensemble division at the 10th Yokohama International Music Competition, 1st prize in the ensemble division at the 12th Romanian International Music Competition, special lecturer prize at the 12th Music Academy in Miyazaki, and an encouragement award at the 26th Risonare Chamber Music Seminar. At the 37th Kirishima International Music Festival, she performed with Krzysztof Jablonski. She also performed with Martha Argerich at the Beppu Argerich Music Festival. She is a recipient of the Kirishima International Music Festival Award and the Tsuyoshi Tsutsumi Music Director Award. She has performed on NHK-FM’s “Recital Nova.” She has received music grants and encouragement awards from the Matsuo Gakujutsu Shinko Zaidan (Matsuo Science Foundation). She has performed in many music festivals throughout Japan including the Miyazaki International Music Festival, Kitakyushu International Music Festival, and Tokachi Music Festival. At the 5th “Masterpieces for the Next Generation,” she played with Nobuko Imai in the Nobuko Imai Viola Recital. She studied violin with Ryoji Kubo and viola with Ryo Sasaki. In addition, she studied chamber music with Kazuhide Isomura, Nobuko Yamazaki, Koichiro Harada, Tsuyoshi Tsutsumi, Tsugio Tokunaga, Hakuro Mori and Hiroyuki Yamaguchi.
She is currently studying in the Music Berlin Masters course at the Hanns Eisler College where she is studying under Walter Kussner, a violaist of the Berlin Philharmonic Orchestra.
CHANEL Pygmalion Days Chamber Music Series Artist.