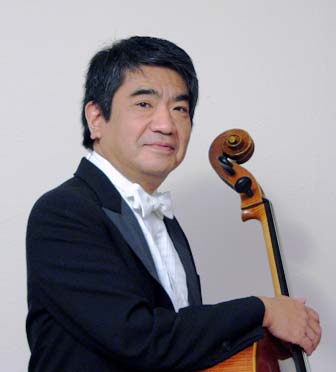 First-Prize winner of the Japan National Music Competition in 1960, Ko Iwasaki studied cello with Hideo Saito. After graduating from the Toho Gakuen High School, he continued his studies at the Juilliard School with Leonard Rose and later, with Harvey Shapiro. He also studied with Pablo Casals in Puerto Rico.
In 1965, he won the Young Concert Artists International Auditions and made his debut in New York. He won top prizes in numerous international cello competitions such as the Vienna, Munich, Budapest, Cassado, and Tchaikovsky competitions. In 1972, he made his European debut with the London Symphony Orchestra under the conductor Andre Previn.
Since 1974, he has been based in the U.S. where he has performed as soloist and as a chamber music player, as well as in Europe, the former Soviet Union, and Japan. In addition, he has participated in numerous festivals, including Marlboro, Aspen and Santa Fe in the U.S., Lockenhaus in Austria, and Kuhmo in Finland. He is a founder of the Tokyo Chamber Soloists and was director of the Okinawa Moon Beach Music Camp & Festival in Japan. Since 1995, he has performed the entire cycle of Beethoven String Quartets as a member of the Japan String Quartet.
He was been invited to serve as a jury at many international cello competitions such as the Cassado in Japan and the Tchaikovsky International Competition in Moscow. He continues to pursue an active concert career, and has served as a professor at Toho Conservatory Graduate School and at Southern Methodist University in Texas.